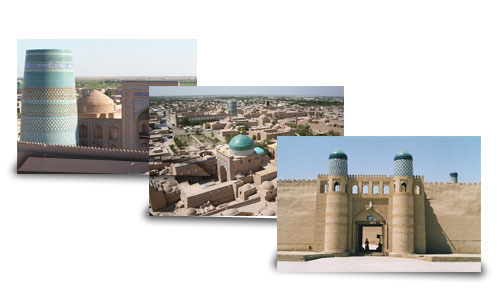 During the VII century AD in the desert lands of Khwarezm, Asian region situated between Persia and the present Russia, arose a small fortified settlement.

As it was built just on the Silk Road, it became quickly an important trade post for all the travelers of those routes. There, they could take a shelter, escaping from the sand storms, from the thirst or from the raider tribes that were used to roam in those steppes.

The town grew in fame and fortune becoming in 1515 the capital city of a Kingdom. For more than two centuries this reign could enjoy wealth and renown that the Silk Road ensured to it. That Kingdom was called Khanate of Khiva and that city Khiva.

Thanks to the History, we could not only choose the name of our Trading co., but we also have been inspired for what concern our goal: continue to be that connection point between Occident and Orient.

Nowadays the world is globalize, information goes at lightning speed, people and goods travel just as plainly, there is no more deserts or bandits to be afraid of. But not for these reasons it is easily. Especially in these years of economic crisis, some investments or some paths still represent a risk, as in the past was a risk pass thorough those lands. So we believe that, then and now, is important share experience, knowledge and resources.

Khiva is composed by an heterogeneous staff that comes from different sectors and fields. Thanks to that, our company is able to take care of the production and research of goods made in China and, on the other hand, the import and distribution in China of products made in EU.

In a crisis moment as the one we are living now, it is essential for every company, and not only for the biggest ones, expands its own horizons to obtain important assets such as reduce the production costs or enter in new markets.

Not only multinational should have this chance but also every enterprise should be able to do this, even though it has few resources.

Therefor our purpose is to give the chance to small and middle firms to approach the Orient.

Khiva has long experience with Chinese and Europan firms, which simplify the dialogue, not always easy, between the parts. Beyond the language problems there are some cultural aspects that sometimes are not considered. Such as: for the Western point of view it is always better be directly even in a negative situation, but for Eastern people, as a sign of respect, it is better say what they think the interlocutor wants to hear. If you can discuss with people that share with you the same cultural background you can avoid possible misunderstandings. Furthermore you can be easier understood about your worries during a negotiation or about the quality levels you want to reach.

Khiva has its own warehouse available. In this way we can stock and check the goods before the shipment or receive and download the products coming from abroad. The warehouse gives us also the chance to assemble and pack the goods according to the customer’s requests. As this situation is quite rare among the Chinese trading companies, with Khiva our customers have a further guarantee that the shipped goods have been really undergone quality controls.

Khiva guarantees the control of the whole production chain. Through the use of trusted suppliers and the accurate manufacturer research, we are able to check and test the goods following your specific guidelines. In this way Khiva can spare the customers bad surprise at the time of delivery.

As foreigners living in China we well-understand the fear of the “Chinese Copy”. For this reason Khiva has established partnership with law firms certified in trademark registrations and patents.

In addiction we can offer to our customers the possibility to buy components from different suppliers and then by our own behalf assemble them (no one will see the final product) and pack them (no boxes or files will get into wrong hands).